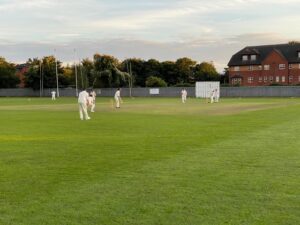 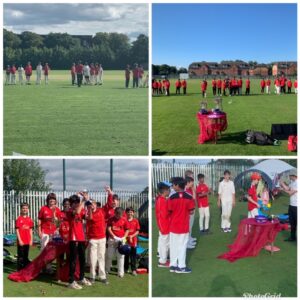 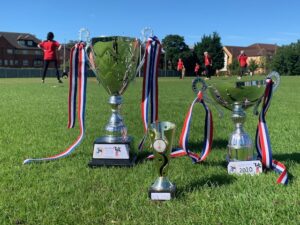 Firstly, a 3 team cricket game between u11 and u13 players Played in a great spirit the three teams were very close at the half ways stage (8 overs). Liverpool Whirlwind on 39/1, Liverpool Storm on 39/4 and Liverpool Hurricane 35/1. Whirlwind lived up to their name and accelerated away to an unassailable total of 83/5, Storm all out 57 and Hurricane 61/6.

Next up the u13s and U15s had another go at this same format, many of the U13s coming straight from their league game at Sefton Park. This time it was a lot closer in the end – this time it was Liverpool Storm that won by 2 runs

The day finished with the Back to Cricket T20 re-match and it was the juniors’ turn to sit on the side and give coaching advice!

Payback time for the Chairman’s XII. Batting first Jez’s team got off to a flyer and finished on 122. The Captain’s XII took a several early wickets and struggled to build a big enough score. Falling short by 10 runs the coveted Back to Cricket journey was handed back to the Chairman

The back to cricket nets and these games have been a big success. We’re hoping to put on nets over the winter for adults  interested in getting back into cricket

Result: Over a hundred children and parents playing cricket in the sun!